Yes you can get great Ultrabooks from Dell, HP, Razer, LG and more, but this Lenovo is stupidly good value

We see you. You’re on the search for a new premium laptop. A laptop not for gaming but for getting work done in Office apps and working on the web. You might want to watch a bit of Netflix, too, and, if such a purchase allows, dabble in games and a bit of video editing.

You also want it to look good, not weigh a ton and avoid the need to faff around with constant charging. Well, there’s a great range of laptops to suit your needs. The downside? The majority will cost you anything between £1,100 and £1,600.

Thankfully, Lenovo Yoga Slim 7 is here and it means you don’t even have to pay £1,000 to get a great Ultrabook.

The Lenovo Yoga Slim 7 is a remarkable laptop. It eyes the performance of rival top thin and light offerings from Dell, HP, LG, Razer then casually matches (and, on occasion, tops) what they deliver, all while leaving you with a wedge of cash for post-lockdown jollies.

Of course, there’s a couple of corners cut as this isn’t some sort of utopian fantasy, but, for most, the lack of some ultra-premium add-ons won’t beat the brilliant value this premium laptop brings. 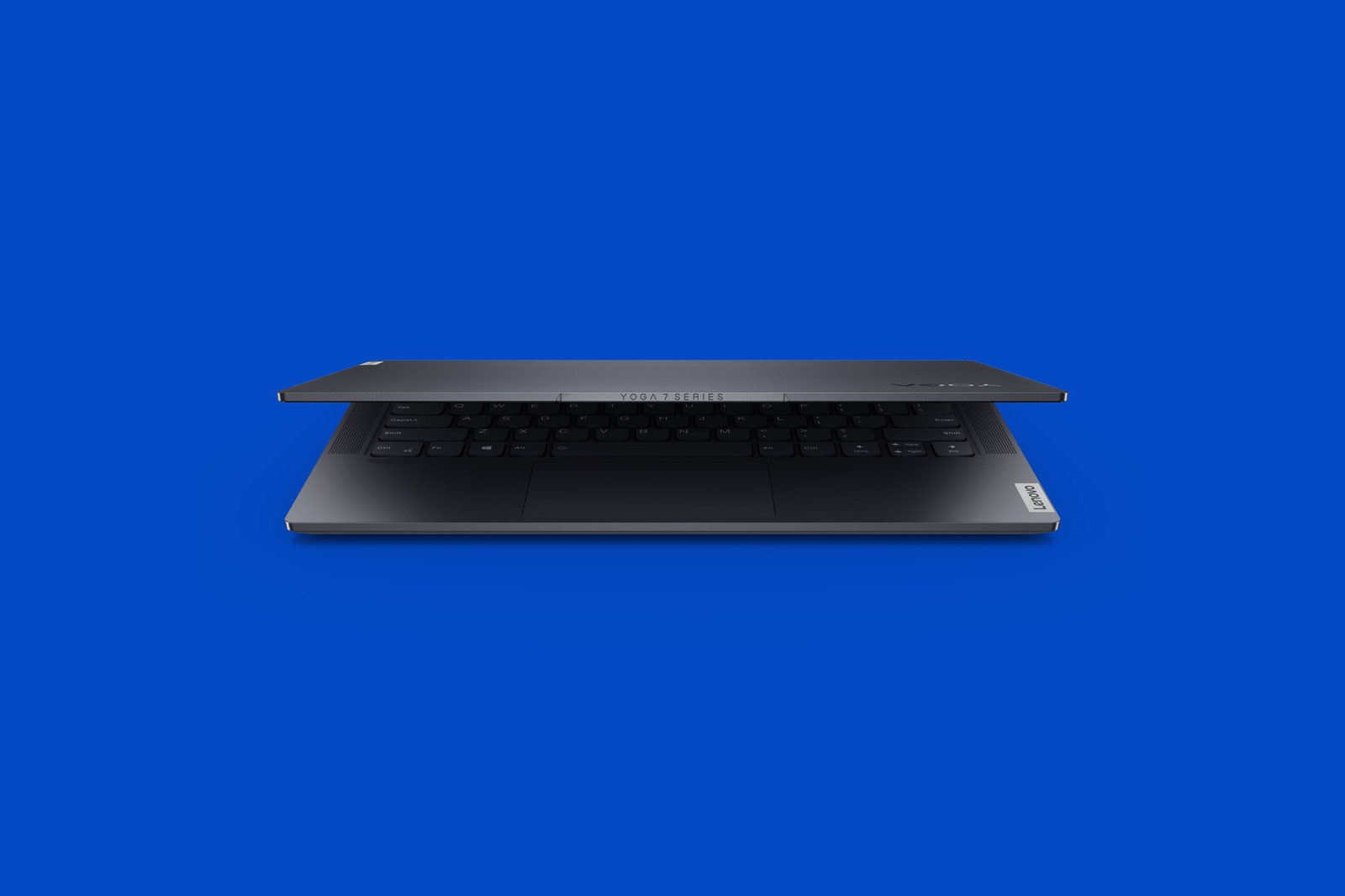 If you look at the top Ultrabooks of Dell, HP, Razer and LG then promptly recoil at the £1,000-plus pricing – along with how this price tag swiftly rises with some menial RAM upgrades – the Lenovo Yoga Slim 7 is for you.

You can, of course, look even cheaper than this Lenovo laptop for added savings, but the Yoga Slim 7 is here specifically to steal the thunder of the best Ultrabooks around.

The Lenovo Yoga Slim 7 will sate any portability, design and performance desires of those who might have been considered higher priced rivals. A sacrifice or two has been made to trim the cost fat, but, where it really counts, this Lenovo is a £849 purchase in a £1,000+ laptop’s clothing.

At first glance, and many that follow, the Lenovo Yoga Slim 7 gives off all the premium Ultrabooks vibes of pricier rivals. The all-metal design means that it feels premium with every touch and, unlike some cheaper laptops, it keeps things simple in terms of colours and fancy accents – giving a professional look from lid to base.

The only chink in the comes in the form of the bezel around the display. This AMD model comes with a plastic bezel that’s more noticeable and unsightly than the slimmer glass equivalents gracing pricier machines. Some Intel versions of the Yoga Slim 7 do come with a more modern glass bezel – but at a cost.

While the minimalist design appeal to those who are looking for something sleek and professional, others may find it a tad boring – with a couple of logos rounding out the spartan design. However, for those who do want a bit of flash, you can pick the Lenovo Yoga Slim 7 up in an ‘Orchid’ variant – a punchy purple hue that would be certain to turn heads.

Despite keeping pace with the lightweight specs of other Ultrabooks, the Yoga Slim 7 does manage to cram in more ports than the Dell XPS 13 and MacBook Air and their paltry USB-C-centric configurations.

However, the USB-C ports are simply 3.1 rather than Thunderbolt 4 – so you’ll have to opt for the Intel version to get the speedier data speeds and support for multiple displays, but those models don’t quite offer the same value proposition as the AMD flavours. 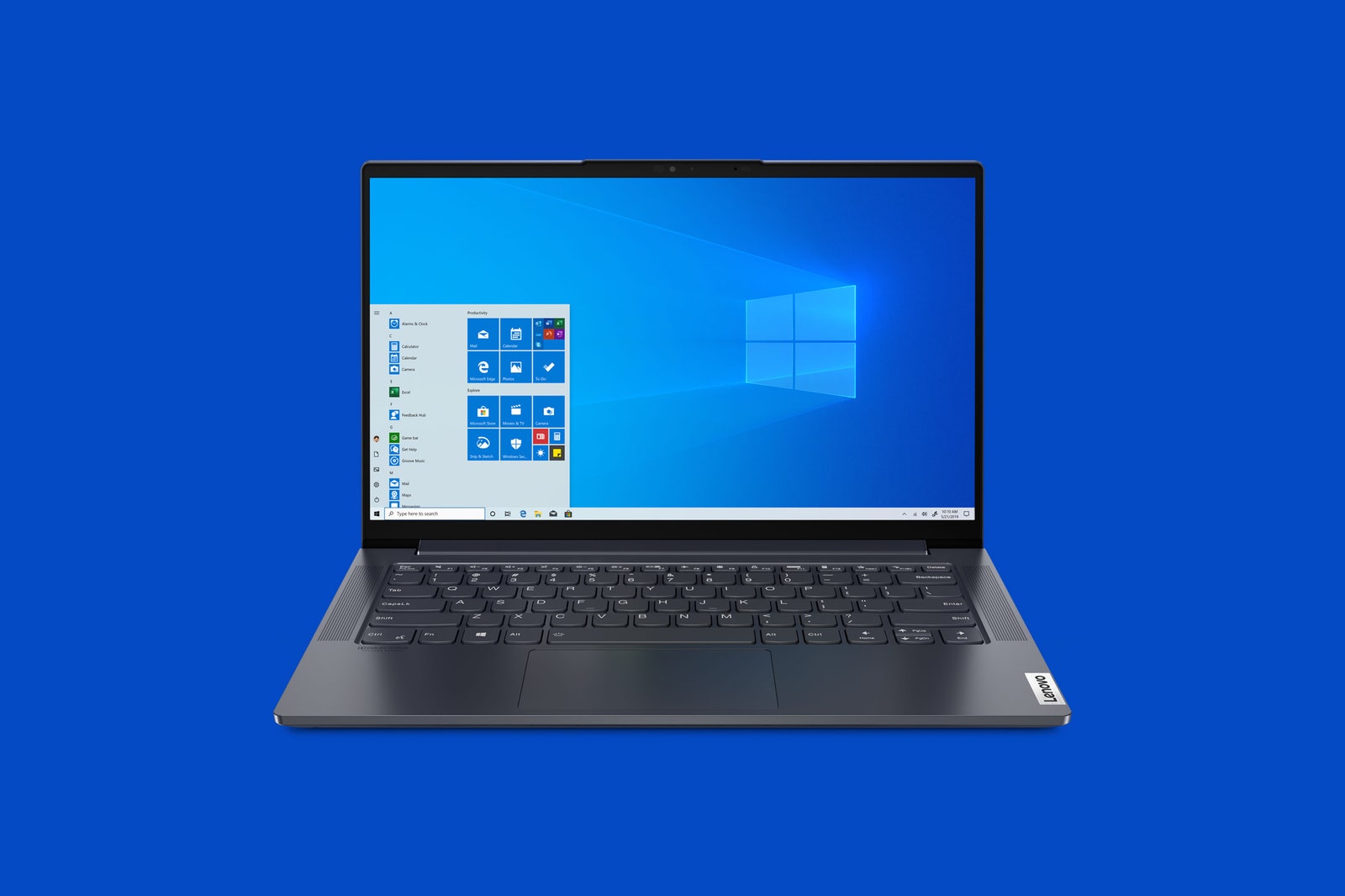 It would almost be unfair to just refer to this laptop as on par with the top expensive Ultrabooks despite the lower price because, day to day, it can regularly exceed them.

In particular, the Lenovo Yoga Slim 7 means that you don’t have to look to the likes of the new M1 MacBooks to get great battery life. It regularly exceeds 11 hours of use, when several other Windows-based competitors often sit around 6-8 hours.

Then, like rivals, there’s fast-charging, too, letting you get up to 50 per cent of power in just 30 minutes. For battery, the Lenovo Yoga Slim 7 has very few equals in the Ultrabook market.

The keyboard is also excellent, offering more travel and feedback than the extremely clicky, low-travel versions you get on the likes on the Dell and HP flagships. Those impressive laptops by no means have bad keyboards, but the Yoga Slim 7 will definitely please those who like a more traditional feeling keyboard compared to some modern takes that feel like you’re typing on an all-too-hard surface.

Keyboards often rapidly deteriorate in quality as you move down laptop price points, so it’s genuinely pleasing to see an impressive one here.

Another feature Lenovo could have easily shirked on is the speakers. Laptops are regularly, and rightly, criticised for tinny sound and a lack of bass. While this laptop doesn’t offer the booming sound of a MacBook or a Surface Laptop 3, you won’t complain about the general audio quality, and there is enough bass there to prevent it from being a jarring absence.

While the everyday productivity tasking you’ll do on the Yoga Slim 7 doesn’t exceed the performance of more expensive rivals, it is close enough that you’d rarely notice the difference. You can open up well above 10 browsing tabs, an Office app and your favourite music streaming program, and this laptop won’t blink.

It impresses yet again with its fan noise and heating levels, or lack of them. This laptop stayed whisper-quiet at any level of productivity work. A feat that rivals can manage, but while also getting warm to the touch on the underside and on the middle of the keyboard. Yes, the Yoga Slim 7 does get warm in these areas, but less so than the latest XPS 13.

For a couple of years now, the AMD Ryzen series of mobile CPUs have enabled some terrific performance at lower prices – from boosting laptops around the £500 mark up to typically £800-plus capabilities to devices like this one that makes it hard to argue forking out above £1,000.

This is what makes the Lenovo Yoga Slim 7 such a good buy. You get performance that almost mirrors the best Ultrabooks around with very few compromises.

And in some areas it doesn’t just mirror these more expensive rivals, it surpasses them. The multi-core performance of the AMD Ryzen 4700u in this Yoga Slim 7 model outmuscles the 11th Gen i5 and i7 equivalents found on Dell, Razer and HP’s best – giving you boosted performance if you like to dabble in basic photo and video editing.

Gaming still isn’t massively feasible here, but you can eke out decent 720p performance on games like Fortnite and Apex Legends.

The single-core performance doesn’t quite match up when it comes to benchmarking tests, but that really doesn’t matter when you venture into how it performs every day. You don’t buy a thin and light Ultrabook with grand expectations beyond productivity and, for writing, browsing the web and even media consumption there’s almost nothing you can’t throw at this machine.

If performance and design are the key factors for you, the value here is unsurpassed.

For those who want a kitchen-sink, high-quality, no-expenses-spared premium Ultrabook experience, there is a stand-out feature of the Lenovo Yoga Slim 7 that may put you off – the display.

There’s no fancy OLED tech here, meaning that if you have a penchant for vibrant colours, a brighter screen for working outdoors and the best-of-best when it comes to watching Netflix and the like, you may want to pay that extra few hundred for a Dell, HP or Razer Ultrabook.

The display is by no means bad. At 1080p and using an IPS panel, the colours are fairly accurate and the resolution offers a good amount of detail. But it does certainly lack the wow factor of premium OLED displays.

Also, most competitors have adopted a 16:10 or even a 3:2 display. Instead, the Yoga Slim 7 sticks with the wider 16:9 aspect ratio. It isn’t a huge deal if you’ve yet to try a squarer aspect ratio, which allows shows more content when scrolling docs and web pages. However, to the converted, it will be sorely missed.

Another premium feature missing here is a fingerprint scanner (though, once again, this is present on some more expensive Intel models). It really isn’t a huge miss, especially as this laptop supports Windows Hello face recognition. But this face-scanning tech doesn’t speak to the quality of the webcam, which is also poorer than more expensive rivals. It’s not ideal – but it’s not a dealbreaker.

So, should I buy it?

Have you not been reading this? Absolutely! Unless you have a specific design for a top-end display or ultra-premium design, there’s no reason to opt for a Dell XPS 13, HP Spectre x360 or Razer Book 13 over this.

If sleek design, blistering productivity performance, strong multi-core chops, a plethora of ports and a pleasing keyboard aren’t enough for you, then, come on, you’re just being greedy now. The Lenovo Yoga Slim 7 will serve you diligently, all while saving you a few hundred quid.

In this article:Featured, Lenovo’s Yoga Slim 7 is a stupidly cheap Dell XPS 13 rival